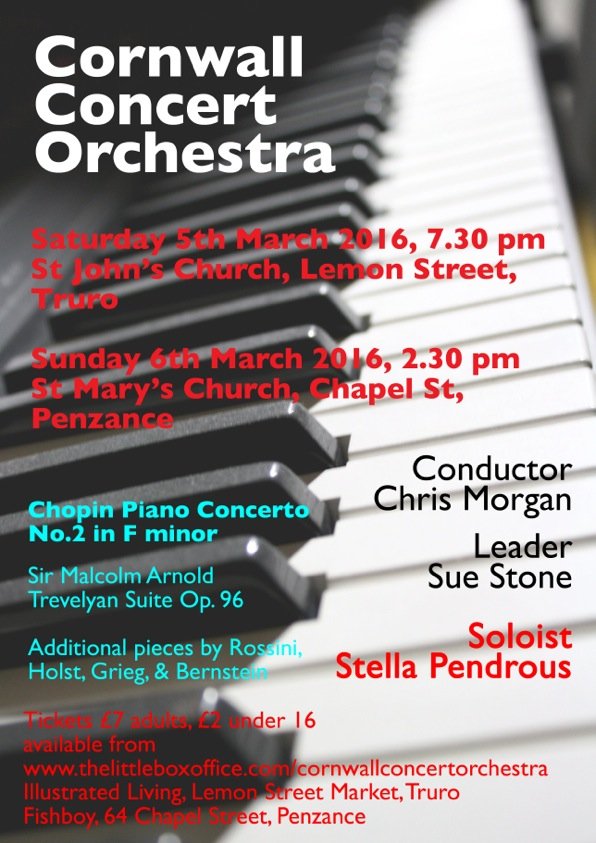 The Cornwall Concert Orchestra bursts into spring 2016 with back-to-back concerts in Truro and Penzance.

The centrepiece of the concerts will be Penzance-based acclaimed pianist Stella Pendrous performing Chopin’s 2nd Piano Concerto with a supporting programme including an unusual piece by Malcolm Arnold.

The orchestra originally formed in 2008 as a ‘returners’ orchestra – to give adults who had been away from playing an instrument for some time to return back to playing in a friendly and enthusiastic environment.

Since 2008 the ‘returners’ orchestra grew from strength to strength, performing in venues all over Cornwall. The orchestra has now re-launched as the Cornwall Concert Orchestra as the orchestra also now includes musicians from many backgrounds as well as people returning to an instrument.

For its Spring Concerts the orchestra is delighted to be collaborating with Stella Pendrous. Stella has given solo and concerto performances in venues such as the Purcell Room, London, Cheltenham Town Hall, St. Giles’ Edinburgh, and at music festivals throughout the British Isles. She achieved a Performance Diploma with Distinction from the Conservatoire National of Gennevilliers, Paris.

Also on the programme is Malcolm Arnold’s Trevelyan Suite. Arnold lived in Cornwall for many years in the 1960s and 1970s and was very active in the Cornish music scene and the orchestra is pleased to be able to continue this connection with Arnold and his music.